Luxembourgish Minister Schmit: “EU should give mutuals a boost” 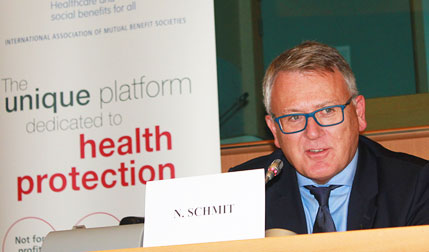 Luxembourgish Minister Schmit: “EU should give mutuals a boost”

Brussels, 15 October 2015 – Mutuals are a special kind of enterprise at the heart of the European social model. They are important contributors to economic growth and financial stability, but they lack legal recognition and are still facing constraints to benefit from the European internal market.

The International Association of Mutual Benefit Societies (AIM) held a conference yesterday to put light on the role and needs of mutual societies.

The event, hosted by the Portuguese MEP Sofia Ribeiro, gathered the European Commission, the European Parliament, the Luxembourg Presidency and stakeholders to discuss “the diversity and capacity of mutuals to contribute to consumer choice, jobs and market stability” as stated by Ribeiro.

Mr Girard, Researcher at the University of Quebec, reminded the audience that being not for profit, mutuals’ core objective is to satisfy member’s needs instead of maximizing return on investment. This is the reason why they can provide quality services at a reasonable price to more than 150 million European Citizens.

But Mutuals also contribute to economic growth and jobs: “Only in the UK, mutuals created more than 120 000 jobs between 2008 and 2013” said Paul Keenan from Benenden UK. According to ICMIF representative Catherine Hock, mutuals represent together with insurance cooperatives, 30% of the global insurance market (€2,4 trillion in total assets). Financially robust, mutuals have even increased their market share during the financial crisis. “No mutual needed a bail-out during the financial crisis”, mutuals expert Thierry Guidet said.

In spite of the incontestable added value for Europe, mutuals are not recognised at EU level and are therefore unable to go cross-border and benefit from the internal market, highlighted Pedro Bleck Da Silva from AIM. In some European countries, people are not even allowed to set up a mutual, in others part of Europe, mutuals are pushed to demutualise and become for-profit companies.

Both the European Commission and the Luxembourgish Minister for Employment and Social Economy indicated their willingness to take initiatives to overcome these hurdles: “it must be a priority for the EU to provide mutuals with a friendly environment to facilitate their further development. Things have been moving too slow” said Minister Schmit. Commission representative Catinat ensured all participants that the Commission is eager to move forward, notably with the help of its expert group on social entrepreneurship (GECES): “The Commission is ready to explore any ways deemed necessary to remove barriers to the development of mutuals”.

However, stakeholders as well as MEP Sven Giegold, and EESC member Alain Coheur regret that no roadmap for concrete actions has been set up yet.

In line with several recommendations of the European Parliament and the EESC, AIM asked the European Commission and Council to take initiatives to: